The best solutions for large-sized modules in future? Hear what R&D "veterans" say

Wafer size increase has become an inevitable trend for the photovoltaic industry. At the manufacturer side, larger-sized wafers can increase the output of wafers, cells, and modules, thereby reducing the per-watt production cost; at the product side, larger-sized wafers can greatly increase the power of modules and raise their efficiencies by optimizing the design of cells and modules; at the system side, as the per-module power and efficiency increase, larger-sized wafer can bring down costs associated with brackets, junction boxes, cables, and land needed for installing these modules, thereby diluting the per-watt system cost.

Theoretical calculations show that compared with their currently mainstream counterparts in the market, modules incorporating 210-mm wafers (210-modules) have a potential of reducing the per-watt system cost by 0.1 RMB or more, making photovoltaic power stations that use 210-modules even more investable.

Now, here comes the question: how do designs of 210-modules differ from 156- and 166-modules? As absolute veterans in core mainstream techniques such as multi-busbar (MBB) and double-glass modules, Trina Solar's R&D team has provided professional answers.

As they explained, half-cutting has been commonly applied to all cell sizes from 156 mm up to 166 mm since 2017. When it comes to size 210 mm, which features an unusual area, a higher level of technique is required. Trina Solar's R&D team began to work on 210-modules in August 2019. After multidimensional simulations and analyses, they discovered that for 210-modules, 1/3-cutting plus MBB will be on top of all other module solutions within the next three to five years to come.

First of all, in terms of power and efficiency, based on the industry's mainstream MBB technique, Trina Solar's R&D team has performed power simulations across different numbers of busbars for mainstream sizes of circular welding bands and different numbers of pieces. The efficiency of 50-cell 210*210 mm PERC monocrystalline cells was calculated at the predicted efficiency of PERC cells as of end of 2020. From predictions below, it can be seen that the half-cutting solution limits the output power of 210-modules as a result of increased series resistance; for the 1/4-cutting and 1/5-cutting solutions, while providing slightly higher powers than the 1/3-cutting solution, as the number of cutting pieces increases, the manufacture difficulty of the modules will increase tremendously and can largely compromise the product yield. For the 1/3-cutting solution, when used in a 9BB–14BB context, the module power difference will be limited to 2 W. Figure 2 shows typical cell design. 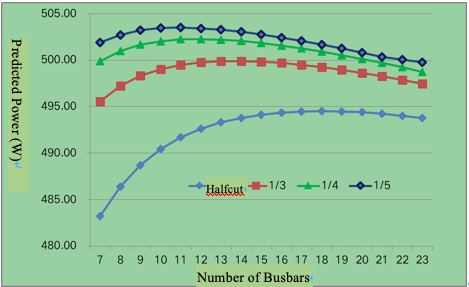 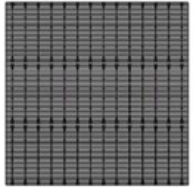 Secondly, in terms of layout design, to achieve successful circuit protection, the number of bypass diodes will be significantly different—for the half-cutting series connection-only solution and the 1/4-cutting solution, five bypass diodes are needed, which add to the manufacture difficulty and the width of the module layout; for the traditional half-cutting and series and parallel connection architecture and the 1/3-cutting solution, three bypass diodes are used and the manufacture difficulty is lower; for the 1/5-cutting architecture, similar to the layout of the currently mainstream shingled modules in the market, two diodes are used, which increases the number of cells to be protected by each bypass diode.

In terms of hotspot risks, whether hotspots will appear is determined by the reversed bias voltage working on the cell in times of reverse bias; the density distribution of the forward current and leakage current produced in the hot-spotted cell also plays a role. Multi-piece small cells, such as typical shingling modules wherein the number of cells in series and parallel connection per bypass diode is up to 34, have functioned well outdoors. Hence, for multi-piece modules, as long as the leakage current center induced during splitting operation is effectively limited, taking into account the safety factor, the modules would have little chance of suffering hotspots when the number of cells in parallel connection per diode is smaller than or equal to 30.

In terms of safety performance of junction boxes, lower-current design for both the modules and the system can minimize safety risks associated with the switching on or short circuiting of the bypass diode. For modules whose current is far beyond that of the mainstream 158.75 mm or 166 mm modules, the safety risks will increase exponentially. These risks can be eliminated by, say, improving the performance of junction boxes and the system-side cables. However, this would mean a significant cost increase, which contradicts the general trend toward fair prices. If our 1/3-cutting 210-modules are used, on the contrary, the output current increase, relative to output current of mainstream modules, can be limited to around 15%. This way, you will expect high-reliability service from the junction box simply with minimal design optimization.

In terms of limitation of input current from the DC side, by utilizing the surplus of inverter input, the maximum output current of the modules so far should be limited to 15 A and the maximum current of the front side should also be limited to around 12.5 A. The maximum operating current of 1/3-cutting 210-module is less than 12A. Furthermore, as cell modules become more efficient and faster, inverter manufacturers will also increase the limitation on current input from the DC side.

As analyzed above, Trina Solar's R&D team believes that the 1/3-cutting plus MBB technique will help 210-modules to achieve higher power with low manufacture and hotspot risks, high junction box safety, and no chance of losing power generation associated with inverter current limitation. It will be on top of all other 210-module solutions within the next three to five years to come.