On June 16, trucks loaded with Trina Solar's 210mm 670W Vertex ultra-high power modules left from the company's manufacturing center in Yancheng, in eastern China's Jiangsu province, and drove to the solar park in Dachaidan, Qinghai, in western China. It was the first of many such shipments, with all modules for the project on track to be delivered by the end of August, adding up to a total power output of 112MW. 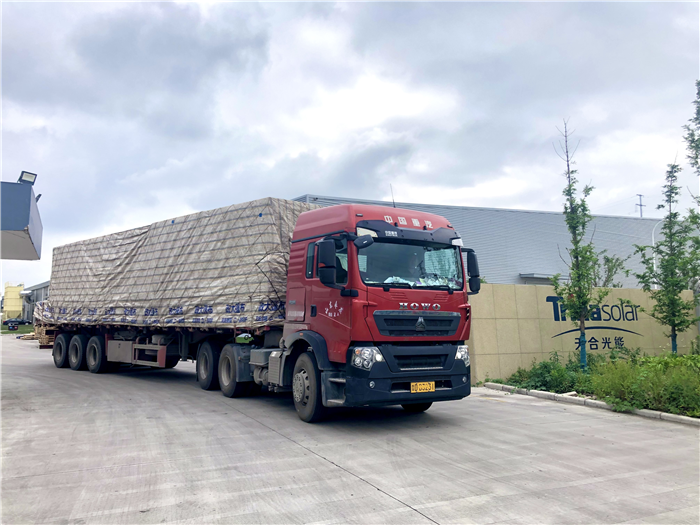 The modules are scheduled for use in the 100 MW Phase I of the Dachaidan PV Project, a massive facility that, when finished, will have a capacity of 1,000 MW. The project exclusively uses Trina Solar 670W series ultra-high power modules.

The Dachaidan Region, located at the northern edge of the Qaidam Basin, is vast, with an average altitude of more than 3,400 meters, making it an ideal place for building solar power generation facilities. However, as the facility is located in the desert, the owner decided that he only wanted to use PV modules with high capacity and high reliability. After comparisons with rival products, the owner finally chose Trina Solar's 210mm 670W Vertex series of ultra-high power modules, a new series launched this year. The series has passed the TUV reliability test and been granted the IEC module performance standards certificates. Furthermore, they are already in mass production. The ability to already be shipping in bulk means that the PV 6.0 era is here while 600W+ modules are becoming the optimal solution as solar reaches price parity with grid-supplied electricity.

Trina Solar's 210mm 670W Vertex series module, which inherits 210mm Series' sophisticated non-destructive cutting and high-density interconnection technology, is a high-power, high-efficiency, reliable and high generating capacity product, suitable for large-scale ground power plants. From the upstream perspective, the module series boasts a reduction in the non-silicon cost of silicon wafers and cells, while, from the downstream perspective, the cost of racks, pile foundations, cables and labor of the mounting system has also been lowered. Compared with competitors’ best 585W modules, the string power of the 670W module is 41% higher, while a saving of 2-3% is achieved in LCOE. When compared with mainstream 450W modules, the 670W version reduces the system BOS cost by 0.15-0.2 yuan/watt, and LCOE by 4-6%.

Sending more than 100 MW of 670W modules to Qinghai is just the beginning. As a pioneer and leader in the industry, Trina Solar has established six super factories worldwide that produce 210mm modules, including the factory in Yiwu, Zhejiang Province, Suqian, Jiangsu Province, Yancheng, Jiangsu Province, and in Vietnam. The Yancheng plant has an annual capacity of 5GW of the 210mm modules, the industry's first fully automated production workshop incorporating modular design and the ability to locally source all necessary parts not built in-house, as well as brand new welding machines capable of welding approximately 4,000 single modules per hour, the fastest in the industry today. The plant also has fully automated visual inspection equipment based on artificial intelligence which can directly detect product defects, resulting in a substantial improvement in inspection efficiency and product yield.

"We fully expect our total cell capacity to reach about 35 GW by the end of 2021, and total module capacity to reach about 50GW, of which both 210mm cells and modules will respectively account for more than 70% of all production," said Cao Bo, Deputy General Manager of Trina Solar. "In the bidding for many large-scale projects, high-power modules are a requirement in nearly 80% of them. At the just concluded SNEC, we found that more than half of the module makers participating in the exhibition already produce and offer 210 component products. In today's PV power plant market, ultra-high-power modules have become a mainstream choice and an inevitable trend as we enter the era of price parity."