Trina Solar has formally joined the global Science Based Targets initiative (SBTi) and signed the Business Ambition for 1.5°C pledge. This once again underlines the company's commitment to helping to limit the rise in the global temperature to 1.5°C through its own actions to reduce emissions. Trina Solar has committed itself to being a global energy transformation leader and to promote global sustainable development, and to achieve the goals of carbon neutrality. 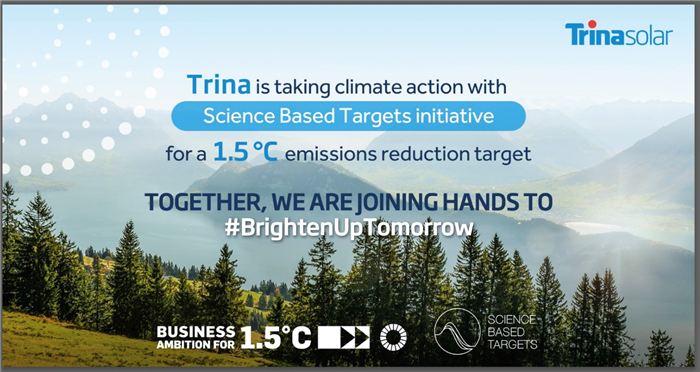 “Trina Solar joined SBTi to better fulfill its mission of ‘Solar Energy for All’,” said Gao Jifan, the company’s chairman. "We will draw on our strategic advantages, our strong product development and innovation capabilities and our global business presence to move as swiftly as possible toward carbon neutrality and sustainable development. Every step that Trina Solar takes will be in line with the 1.5°C pledge, and we will do our utmost to create a carbon-free world.”

In December 1997 the Kyoto Protocol to the United Nations Framework Convention on Climate Change, the first ever international act by all countries to limit greenhouse gas emissions, was signed. Inspired by the signing of the protocol and former U.S. president Bill Clinton's Million Solar Roofs Initiative, Gao Jifan founded Trina Solar, one of the world’s first makers of PV modules.

Trina Solar, as a leading global PV smart energy solutions provider with the vision of creating a carbon-free world, provides global customers with three-in-one PV solar solutions consisting of high-efficiency modules, intelligent trackers and power plant operation and maintenance services. By the first quarter of 2021 Trina Solar had shipped more than 70GW+ of modules, which have generated about 90 billion kWh of clean-energy power and reduced CO2 emissions by 94.22 million tons, equivalent to planting 5.1 billion trees.

SBTi was jointly launched by the World Wide Fund for Nature, the Carbon Disclosure Project, the World Resources Institute and the UN Global Compact in 2015, setting a carbon emissions target to limit global warming to 1.5°C or 2°C .

Trina Solar joined the1.5°C initiative, which calls for a higher reductions target and stronger actions to achieve it. Trina Solar is also one of only nine companies in China that has backed the more stringent 1.5°C goal. More than 1,500 companies worldwide have joined the SBTi, including more than one fifth of the Forbes Global 500 companies.