Should Solar Developers and Financiers Be Taking a Closer Look at Bifacial Solar?

Anytime a new innovation or invention hits the market, it can be difficult to immediately discern if it’s just a fad or if it actually delivers value. So it makes sense for business leaders to be hesitant about embracing the latest innovation until real-world data demonstrates its economic benefit. But once the innovation proves its value, it only makes sense to take advantage of it.

Due to the relatively recent launch of bifacial solar modules a few years ago, this “wait-and-see” mentality has not been unusual among solar developers and other industry stakeholders. Although many people were quick to understand the increased value offered by bifacial solar modules, some skeptics understandably remained. After all, real world deployment can differ greatly from the controlled environments of laboratories and R&D centers, especially because back-side gain has significant dependence on the site albedo/ground characteristics.

However, now that bifacial PV modules have been deployed globally for a few years, these systems have accumulated a repository of real-world data. And in every instance, the results have been as good or better than expected.

It’s taken some time to gather reliable data on how bifacial modules perform over the course of the year throughout different seasons, and then over multiple years.

In May 2019, the U.S. National Renewable Energy Laboratory (NREL) began a multi-year study on bifacial performance. While it’s still early days in the study, NREL found average energy gains as high as 9 percent. This energy gain is more than their initial simulations forecasted. NREL researcher Chris Deline noted that after publishing their bifacial module results “solar installers are going to see better terms on their project financing.”

Meanwhile, Lightsource BP, one of Europe’s largest solar developers, began testing bifacial systems in Northern Ireland in 2018. Their research has shown 8 to 12 percent additional energy yield generated from bifacial modules, according to reporting by Greentech Media. 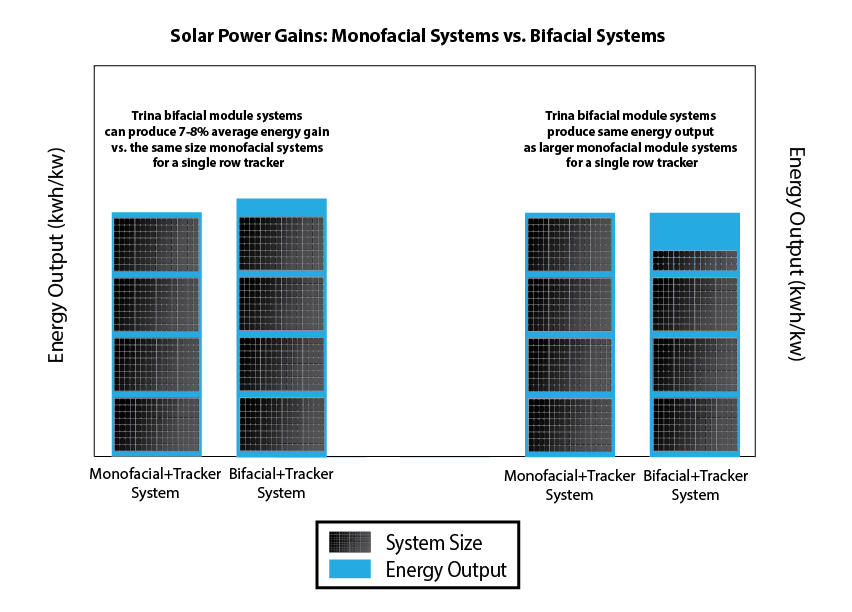 Bifacial modules also create flexibility for project financing in other aspects, such as its geographic footprint. Bifacial PV modules can generate more energy on the same plot of land with the same number of trackers and inverters compared to monofacial modules. On the other hand, it’s also possible to generate the same amount of energy as a monofacial installation with a smaller bifacial project on less land.

All of this new research on capacity and increased power production will help provide guidance for financiers to update investment and cost of capital standards accordingly. With these new standards on power generation readily available, financial contracts for PV systems should also change to accommodate better returns from bifacial modules. In many instances, the gains realized should also offset the costs associated with the implementation and installation of bifacial modules on legacy solar PV systems.

Bifacial PV modules also come with a 30-year power warranty, compared to the traditional 25-year warranty. This allows for increased energy production over the system’s lifespan. Recent research shows bifacial modules generate around 27 percent more energy over 30 years when combined with a single-axis tracker, which leads to a 21 percent decline in levelized cost of energy and an even faster ROI.

As a Tier 1 solar manufacturer leading the industry in technological and engineering improvements, solar developers and financiers know they are working with a quality company and a bankable manufacturer with 20 years of broad industry experience of the highest credibility.

At the end of the day, the increase in energy output can provide significant financial benefits for solar project developers, financiers and utilities.