Trina Solar today announced that its Vertex 660W+ solar power modules have received IEC 61215 and IEC 61730 certification for their performance and safety from TÜV Rheinland. This series generates power of 675W with a conversion efficiency of 21.7%. It is the world's first IEC certification for 660W+ modules issued by a highly authoritative international certifying body. It is also another major breakthrough in terms of the reliability of Trina Solar's Vertex 210 modules. This industrial milestone was marked at a certification ceremony in Changzhou. 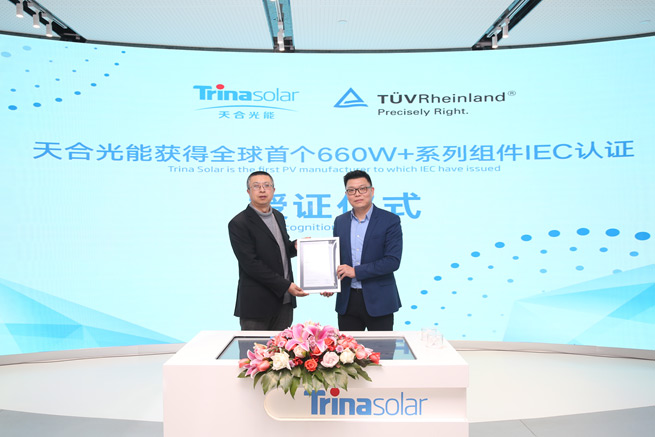 The Vertex 210 family covers five power types of modules, namely 400W, 500W, 550W, 600W and the new 660W, each of them suitable for all-around application, including household and commercial rooftops, power plants and agricultural and fishing lighting.

Zhao Mengyu, Senior Director of the Quality Department of Trina Solar, said at the ceremony that since Trina Solar was founded, it has been driven by innovation, reliability and a strong focus on customer needs. The Vertex 660W+ modules have greater scope for reducing BOS costs and photovoltaic power LCOE, and this will help accelerate the PV industry’s development, and in particular Trina Solar’s endeavors to build a zero-carbon world that will benefit all mankind, Zhao said.

“IEC certification for the Vertex 660W+ modules is another major breakthrough by Trina Solar following certification gained for its 550W/600W+ modules in September. It’s not only a great innovation for Trina Solar, but also signals the tremendous prospects for large power plants to reduce BOS costs and LCOE while increasing revenue.”